Why not Divorce Mediation by Caucus?

Issues with Caucusing in Divorce Mediation 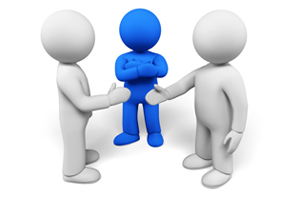 During his time as a family lawyer, collaborative attorney, and trained mediator, Mr. Darren M. Shapiro has not only encountered a range of different cases regarding everything from child custody, to divorce - he has also seen the different ways that legal professionals handle those cases. One thing that he has noted over time is that some professionals take different approaches to mediation, providing clients with a different atmosphere, or focusing their negotiation around a different set of pre-determined rules. During his time as a mediator, Mr. Shapiro has frequently drawn attention to the importance of honesty, trust, and transparency between all parties involved in mediation. He believes that if any client feels as though they are receiving unfair or limited treatment in comparison to the other client, the format may be compromised. However, some mediators allow for a controversial feature in mediation known as "caucusing". Caucusing in divorce mediation refers to the instances wherein a mediator provides separate meetings for each party involved in the divorce. While some professionals, like Mr. Darren M. Shapiro, will consider accessing this solution temporarily, others will make it a significant part of the mediation process - frequently moving back and forth between clients.

Though Mr. Shapiro recognizes that there are certain instances wherein caucusing can prove effective, he prefers to keep separate meetings out of the mediation process. During his mediation sessions, Mr. Shapiro generally works so that everything is done with the knowledge of both parties together. This helps his clients to recognize his presence for what it is - a neutral party that can allow for a more organized negotiation period. Mr. Shapiro wants his clients to see him as a neutral solution to ironing out agreements for the future, and as such believes that separate meetings or "caucusing" could disrupt the natural and collaborative flow that mediation creates.

In Mr. Shapiro's opinion, one of the most worrying problems with caucusing is that it limits the intimacy typically created within a negotiation technique. Instead of permitting both parties to become involved in the resolution of their disagreements, the mediator moves back and forth between parties conveying suggestions. This means that discussions are stunted, and both parties cannot examine the different opinions of the opposing parties in a safe environment. What's more, the caucusing method can sometimes alter the position of the mediator so that they no longer appear to be a neutral party. As Mr. Shapiro has noticed in the past, when all conversations with opposing parties take place outside of the sight of the other client, many spouses can begin to feel as though the other side is plotting behind their back. After all, divorce is a naturally emotional subject, and there are plenty of opportunities for feelings of paranoia and concern.

Laurie Israel, a mediator from Mediate.com, pointed out a few issues in a 2010 article on her website that helped to outline the concerns of caucus - problems that Mr. Shapiro agrees with. In the article, Laurie Israel suggests that:

In Mr. Shapiro's experience, when mediators allow for mediation through caucus, they either access it as an ongoing solution, or use it in periods of strategic intervention, allowing clients to vent during high-conflict arguments. Though mediation isn't intended as a place for spouses to vent their frustrations, the first hint of conflict shouldn't necessarily prompt a mediator to embrace caucusing. Mr. Shapiro, as well as several other mediators, believe this process to be risky. If nothing else, running backwards and forwards between clients can give mediators excess power when it comes to interpreting messages and defining issues - something that should be left to the parties themselves. Caucusing can remove the transparency of mediation, which corrupts the flow of thoughts essential to resolving issues.

Mr. Darren M. Shapiro believes that mediation thrives off neutrality - that's why he provides his clients with a connected and neutral location for discussion, where both clients feel heard, and safe. If any client feels as though the mediator is not neutral, or is biased, then the process becomes jeopardized. This can happen frequently in cases when private conversations exist between a mediator and a single party, and it overshadows the ability to find a resolution that both parties agree with. Mr. Shapiro finds that mediation works best when both clients feel they are getting the same level of neutral interaction with their mediator. While mediators can often work to give their clients the same amount of caucus-based mediation, the secretive conversations remove the neutrality from the situation and can leave clients feeling suspicious. Many mediators agree that the process of mediation is best suited to situations wherein negotiation, compromise, and collaboration are put first. When caucusing is used, it intervenes with the natural flow of communication in the mediation, and can leave clients wondering whether they can trust their mediator at all.

Though there can be certain circumstances in which caucusing is necessary, the process of conducting meetings behind closed doors is often considered to be a questionable solution for mediating couples. Many agree that mediation works best as a joint approach that promotes greater understanding and empathy on behalf of both parties. To learn more about the options available in divorce, including mediation, please contact our principle, Mr. Darren M. Shapiro to learn more. You can schedule a free initial consultation either with your spouse for mediation, or individually if you do not want to use this office as your mediator. Contact us via our online form, or over the phone at (516) 333-6555.