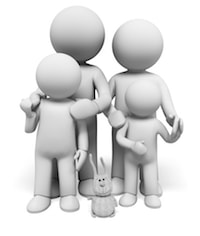 Marriage and relationships do not always go according to plan. Even if you live for years together with your spouse, start your own family, and begin to raise children as a couple, there's always a chance that something could come along and drive you and your other half apart. Some couples simply fall out of love or grow apart, whereas others face issues with communication problems and infidelity. Whatever the reason, if something goes wrong with your marriage or even child custody issues for non married people, it's important to make sure that you have the right support by your side - not just for your sake, but to argue for what you believe is in the best interests of your children too. Darren Shapiro has been helping residents of Western Suffolk County as a child custody lawyer with these issues for many years now.

Interestingly, the statistics surrounding divorce in New York are better than you might think. The New York Post suggests that New York state currently has one of the lowest divorce rates in the country. However, while it's tempting to assume that this means you'll never have to worry about something like a divorce case or hiring a child custody lawyer, the truth is that issues with relationships can happen no matter where you live, be it in Suffolk County Long Island or beyond.

Of course, for parents, bringing an end to a marriage can be even more difficult than it is for other couples. Not only do you have your own issues to think about when it comes to things like asset and debt distribution, but you also need to make sure that there are visitation and custody solutions in place to give your children the best future possible.

When other parts of your life feel chaotic, one of the best things you can do to stay "in control", is seek out the support of a local child custody lawyer who is familiar with the courts in your area. With nearly two decades of experience as a lawyer, that has been focusing on family law since he opened his own office in 2005, Mr. Shapiro could be the answer for many Western Suffolk County residents in search of a convenient and reliable source of support. Mr. Shapiro has dealt with many cases featuring complex issues linked to parenting rights, vitiation, and more. This means that he can not only fight for your best interests in a case but also protect what you want to advocate for regarding the needs of your children too.

Suffolk County is a large place. As of the 2010 census, the population of the county was around 1,493,350 according to Wikipedia. Western Suffolk features the five towns of Babylon, Huntington, Islip, Brookhaven, and Islip. This area alone contains around 91% of the County's population according to government records. Of all the towns in Suffolk, the most densely populated is Brookhaven, however, the population density in Western Suffolk is approximately 2,417 people per square mile. This means that the area is a hugely diverse space. As family attorney with years of experience in his craft, Mr. Shapiro has the background knowledge and skills to help support parents in Western Suffolk county when they need to make decisions on the behalf of their future, and their children. Today, Mr. Shapiro lives within Western Suffolk, and was once on the Assigned Counsel Panel for the Suffolk County family court when he started in his own practice.

While some parents will need to take the matter to court and access Mr. Shapiro's skills as a litigator, others will prefer to pursue other alternative modes of dispute resolution, including collaborative law and mediation. For instance, mediation can be an ideal solution for parents who want to maintain some of their existing relationship for the benefit of the children. It provides a safe place in which parents can discuss their concerns without the constant input of the court. While this won't be the right option for everyone, it does help to offer a solution that's less emotionally overwhelming than litigation.

As a child custody lawyer, Mr. Darren M. Shapiro can advise parents across a range of matters, either through litigation, collaboration, or mediation processes. Often, mediation and collaborative law are the preferred choice for child custody matters, as they can help to preserve some of the relationship that remains between the divorcing parties, for the sake of the child. Additionally, these solutions are often less emotionally draining than litigation.

Regardless of whether parents choose to have more input from the court through the litigation procedure, or they simply ask a judge to respond to the agreements that they make through collaborative law and mediation, the New York courts will always place a strong focus on the concept of the "best interests" of children for the sake of child custody and visitation decisions. Mr. Shapiro is on hand as a child custody attorney for parents in Western Suffolk County to help provide guidance on what the best interests statute should mean to couples, and how it might help them to make important decisions about the future of their youngsters.

As both a divorce attorney and a professional in the world of child custody, Mr. Shapiro has spent years honing his skills in family law to ensure that families and individuals can prepare for the future in a positive way. For instance, he might help some couples to consider the legal requirements around joint custody, which allows parents to work together to make decisions about their child's future. In other cases, shared physical custody or sole custody might be an option. This means that only one parent will care for the child full time, while the other parent receives visitation rights.

There's no one-size-fits-all solution for child custody law, which is why Mr. Shapiro is on hand to explain the concept of every solution to his clients in Western Suffolk County. From his office in Jericho, Nassau County, he's a convenient distance away for the residents of Western Suffolk County and can be found off exit 34 of the Northern State Parkway, or even exit 40 on the Long Island Expressway.

No couple wants to have to think about the complexities of divorce or the anxiety that can be caused when making decisions about child custody, visitation, and even child support payments. However, if something changes in your marriage, it's good to know that there's a local source of support nearby. Mr. Darren M. Shapiro has been improving his skills since he was admitted to the New York State bar almost 20 years ago in 1999.

If you need help pursuing your best interests, and the best interests of your child in Western Suffolk County, reach out to Mr. Shapiro today either through his contact form or through a call to his office on (516) 333-6555. Here, you can arrange your free, half-hour initial consultation.