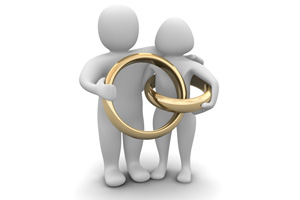 Mr. Darren M. Shapiro Esq. has been working within the courts of New York for a number of years now - ever since he was admitted to the New York State Bar in January 1999. Since he started his own firm, over a decade ago, he has helped individuals manage a number of different family-law-related issues - many stemming around the many complications that may arise through divorce. For instance, in New York, agreements which are placed into effect in front of a religous official when people are getting married can be seen as valid, even if the minister that authorized the marriage received his authority from a religion that isn't determined as traditionally conventional. Reference to prior cases, precedents, may help to illuminate what might be a relatively confusing topic in divorce law.

Oswald v. Oswald, for example, considered the presence of a prenuptial or antenuptial agreement in the case of a marriage ceremony that was performed by a Universal Life Church Minister. The agreement had been executed by both parties involved - as it would be for any agreement of this particular nature - in a process that took place three days prior to the ceremony, but the terms of the agreement only took place following the solemnization of the marriage. Five years after the marriage, the plaintiff in this particular case sued, asking for the court to declare the marriage as void from the beginning, and the agreement as unenforceable because the person who performed the ceremony did not have legal authority to solemnize the marriage. The defendant, however, responded by denying the invalidity of the marriage, and counterclaimed for a divorce.

As Mr. Shapiro informs his clients, divorce cases might involve more issues for the people involved within them - particularly when arguments through litigation are involved. There are a number of steps that may be involved before a final decision is made regarding any particular case. In the circumstances outlined above, the lower court granted the motion made by the plaintiff, but the defendant appealed, arguing that the plaintiff should not be permitted to define the marriage as void because he had indicated otherwise on their joint tax returns. The court then agreed that a litigant could be prevented from taking a position that was contrary to the position that they had taken for the purpose of filing taxes. However, the court also noted that a marriage that is void can't necessarily be automatically validated simply because a party regarded themselves to be married.

The appellate court in the above case determined that the lower court's decision that the plaintiff should be able to challenge the validity of the marriage was just, and reasoned that the plaintiff had the burden of submitting competent evidence to show the absence of any factual issues in the marriage. Under domestic relations law, no religous marriage can be officially be determined as valid until it has been solemnized by a clergy member or minister of any religion. In this particular case of Oswald v. Oswald, the issue in question was whether the UCL had authorized the officiant that presided over the pairs marriage to preside over spiritual affairs, and whether the ULC even counted as a church under the meaning of the statute upheld by New York law.

Obviously, as Mr. Shapiro outlines to his clients, the complications surrounding divorce can become a lot more challenging when issues of religion are brought into play, as they were in this particular case. While the New York Court can't necessarily determine which religions are valid, and which are not, it must assess each case in consideration of the statutes that are in place surrounding divorce law. In this case, the evidence given by the plaintiff had included the credentials of ministry that were held by the officiant - which established his position as an ordained minister with the ULC. These documents outlined that those ordained as ministers with the ULC were authorized to perform wedding ceremonies, as well as a range of additional religion-based services. The Plaintiff argued, however, that the ULC made use of an unconventional method for choosing it's ministers, and the court reasoned that it could only determine whether the ULC had stuck to its own rules regarding the selection of ministers, but could not question requirements for membership or how ministers were chosen in the first place.

The plaintiff made the argument that the ULC could not be counted as a church because there was not a stated place of worship present, but the defendant responded by submitting an affidavit from the president of the ULC stating that numerous places of worship existed throughout the state. The New York Court found that this raised enough issues to prevent summary judgement. The plaintiff also argued that the ULC did not have a specific belief that distinguished its particular church as a religion, but the court indicated that there was no basis that allowed them to conclude that it was not a church under the law of religious corporations. The New York court explained that the ULC conducted itself in ways that were similar to conventional churches, and followed a number of the same values upheld in other religions. The ULC was also found to ordain ministers, and though they were not necessarily required to preside over certain congregations within physical churches, the practice was encouraged.

Following a close consideration of all the evidence that was presented, the appellate court found that the plaintiff had failed to establish that the person who had performed the ceremony did not have any authority to solemnize the marriage that had taken place. The summary judgement was therefore reversed.

If you are attempting to enforce marital agreements that were set in place during a divorce procedure within the courts of New York, please contact the Law and Mediation Office of Mr. Darren M. Shapiro for information and guidance. You can get in touch either via our online form, or via phone call at (516) 333-6555.