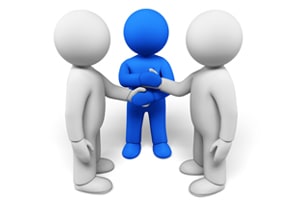 Presumptive mediation is now emerging as a mandatory addition to New York cases for child custody and divorce cases in family law, beginning in the fall of 2019. This has prompted a number of significant changes in the way that divorce, and child custody cases are addressed in Nassau County, Suffolk County, and other regions throughout New York. As both a mediator and a divorce attorney, Mr. Darren Shapiro has had first-hand experience seeing how the implementation has worked in the Nassau County family court for child custody cases and Long Island divorces. In his experience, starting in the fall of 2019, when custody cases are now filed, either for new custody cases or modifications in Nassau County family court (and most likely Queens, and Suffolk County Long Island), the first court appearance will be scheduled with mediation. Neutral mediators are assigned to the case, the parties are directed to meet with them, and the case is scheduled accordingly.

The parties in these cases will have the option to have their lawyers in their mediation sessions if they choose. What’s more, if an attorney has been assigned to represent a child, that attorney can be present too. In the family court of Nassau County, parties may be able to avoid mediation. For instance, cases involving serious allegations of domestic violence and similar conduct that could lead to an order of protection case may not be suitable for mediation. However, Mr Shapiro has still seen cases referred to mediation after an order of protection has been issued. In those cases, however, the referral took place before the Mandatory Presumptive Mediation program began.

Though Mr. Shapiro is a child custody lawyer and divorce lawyer, he also offers alternative dispute resolution in the form of mediation via his practice. As such, Mr. Shapiro does believe that alternative dispute resolution can be very useful in the family court environment, though in family court, Mr. Shapiro is a lawyer for one side, he is not a mediator in the court. However, when Mr Shapiro is hired to represent a mother or father in the family courts, then his role is to be an advocate for a client. He can provide his clients with the option to have him with them when they’re in mediation, or in the courthouse if they want to try and mediate with the other party. Generally, Mr. Shapiro aims to give his clients as much control over the mediation experience as possible, standing just outside of the mediation room, so that his client can access him if needs be. However, if his client is not comfortable mediating without him being present, he will attend the mediation too. His client’s comfort is paramount.

If, in a child custody case, the other side in the case chooses to also have their lawyer present, then Mr Shapiro will often attend the mediation session too. However, in this case, Darren Shapiro will sit back when representing his client so that the client can have their voice heard. The role of Mr Shapiro here is to guide the client and answer any questions that he or she might have. Some clients may also require more involvement during the mediation session too.

Before a court appearance is required, Mr. Shapiro can also sit down with his client and discuss their options with them. His background in litigation and mediation means that Mr Shapiro can provide his clients with an insight into what they can expect from court-ordered sessions of mediation. So far, Mr Shapiro has seen that any agreements made in mediation by both parties are usually approved by the courts. Mr. Shapiro will therefore discuss his client’s options with them when it comes to agreeing partial agreements, and comprehensive settlements in advance.

The mediation that takes place within the family courts can refer to all issues that may need to be addressed when a parenting time or custody order is carried out. The parties may need to determine what the residential custody arrangement for their child is going to look like. Usually, both parties will also need to consider what the parenting time schedule is going to look like too. Parenting time adjustments may need to be made for weekends, weekdays and special occasions. It may also be important to discuss arrangements for holidays and think about whether relocation with a child will be necessary in any fashion.

Once the session for mandatory mediation has been completed, the case can then go back to a referee or judge that was originally assigned to the case. Mr. Shapiro can then act as the lawyer for his client and rejoin them if he was not sitting in the mediation session. In some cases, the child custody arrangement may once again need to go in front of the judge or referee for further mediation or the issue might progress to litigation.

If you would like to learn more about the new complications and opportunities that come with the arrival of presumptive mandatory mediation in family law, check the other blogs and articles on this website. You can also reach out to Mr. Darren Shapiro to discuss mediation, law, and child custody arrangements at your convenience. Call the office or use the online contact form to arrange your first free initial consultation of up to thirty-minutes.