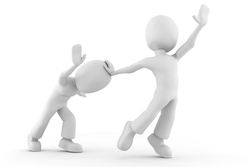 Even Family Offense proceedings directed at obtaining an Order of Protection, despite their contentious nature, can be settled. Sometimes the Petitioner may decide to withdraw their petition or the case can be settled with an agreement on an order of protection for a certain period of time without any admission by the Respondent. Of course, however, these cases often need to be litigated. Darren M. Shapiro, Esq. has experience with many order of protection cases and can defend or prosecute your Family Offense petition. As a New York City and Long Island Order of Protection lawyer he has represented many men and women on both sides of the case. Proper elements of Family Offenses must be alleged in the petition for a Temporary Order of Protection to be granted by the court while the case is pending. These elements must be proven at a trial by a fair preponderance of evidence, which is the civil standard as Family Offense proceedings in family court, or the Supreme Court in the context of a divorce are not civil rather than criminal cases. Criminal cases must be proved beyond a reasonable doubt which is the highest burden of proof that exists in our law. The two different burdens of proof account for the differences in results between criminal and civil proceedings based upon the same evidence.

A spouse pushing the other during an argument could be an example of Harassment in the Second Degree. If someone with intent to harass, annoy or alarm another: Physically attempts or commits contact; follows someone in public; or engages is a course of conduct or acts which alarm or seriously annoys the other person is considered Harassment in the Second Degree by New York law. Punching another family member and causing a cut would qualify as Assault in the Third Degree. Assault in the Third degree exists in situations where with intent to injure another or with recklessness or negligence with a dangerous instrument someone causes injury to the other person.

Disorderly conduct is frequently made as a family offense allegation.  If a person trys or recklessly causes a risk of public annoyance, alarm or inconvenience by:  noise; fighting; abusive or obscene language; and not listening to a proper police order to disperse when congregating in public – disorderly conduct may be found. Where a wife or husband screams obscenities at their spouse in a park they might be accused of disorderly conduct.

If the other parent of a child calls the other and hangs up late at night repeatedly after being told to cease such conduct they can be found to have committed Stalking in the fourth degree. A person intending to engage in conduct connected to a specific person that knows or should know that the conduct might:  cause the other to fear for their health or safety or that of their family; cause material mental health harm to the person because they are telephoning, following, or initiating contact and the person was informed to cease such activities; cause the other to fear that their job is threatened since they are appearing, calling or making contact at the person’s place of work after being told to stop this activity.

Using physical menace to try to put or put another in fear of dying, imminent serious physical injury or injury is called Menacing in the third degree. A spouse holding her hands up as if she is going to choke her spouse may constitute Menacing in the third degree.  A last frequent family offense allegation is Aggravated Harassment in the Second Degree. When a person means to harass, threaten, alarm or annoy someone else by communication on the phone, mail or writing in a manner likely to cause alarm or annoyance or having someone else initiate the contact.  A husband that threatens to kill his wife over the phone would have committed the Family Offense of Aggravated Harassment in the Second Degree.

Darren can negotiate or litigate effectively for you whether it is in the Family Court or Supreme Court. Give us a call to talk about your situation.  It will be our pleasure to talk to you about it.