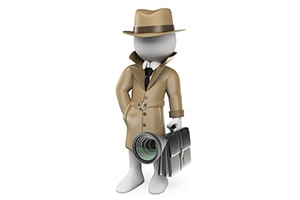 Orders of protection are one of the many complex areas of law that often get intertwined in family law cases and divorce. Mr. Darren M. Shapiro, as Nassau County family law lawyer deals with these cases from his Long Island office in Nassau County. An order of protection is designed to offer family members (including spouses), some freedom and protection if they have been victims of domestic violence or have been threatened by another person. One question that can come up in court cases, is whether using a private investigator, or PI, to gather evidence on a spouse during an ongoing divorce or family law case like child custody, when an order of protection is place, is a violation of the order. Mr. Darren M. Shapiro, as a family law attorney, often attempts to draw attention to the details of various regulations in law by pulling focus to specific cases that may have taken place in the past.

In the case of "Anonymous v. Anonymous", the husband in the case filed for a summary judgement motion to dismiss the petition from his wife that alleged he had violated an order of protection. The order had been entered without any finding of fault, and it required the husband to stay a minimum of 1,000 feet away from the wife's job and residence, with the exception of court-ordered child visitation, as well as the ability to visit church on Sundays. The order also demanded that he commit no criminal or family offense against her. However, the wife suggested that the husband had purchased the services of a private investigator, and that PI had recorded the wife, creating a DVD that showed she had gone to a motel to have an affair with a priest at the church where she worked. According to the wife, the husband gave the DVD over to her employers, which forced her to resign.

Obviously, as Mr. Darren M. Shapiro informs his clients during divorce or family law cases, issues such as these are quite complicated. Although the orders of protection are designed to protect individuals who feel harassed or threatened by the other spouse, the other spouse still has the right to gather evidence that might help to support his or her case in court when it comes to settling the divorce. Mr. Shapiro, as a family law attorney can help clients try to understand which measures can be taken to gather evidence, but also which information may be most useful when it comes to pursuing their best interests.

In the case outlined above, the wife argued that the husband had no purpose for sending a PI to follow her, and that his goal was to humiliate her and cause her to lose her job. The wife also claimed that this violated the 2009 order of protection which came after the wife sued for divorce in 2008, and the husband counterclaimed for divorce, arguing that she was committing adultery with the priest. In the case above, the wife argued that the husband hired the private investigation following the filing of counterclaims, and that he had violated the order of protection via an agent. Notably, in the summary judgement filed by one of the family law attorneys, the wife made no dispute that she had engaged in an affair with the priest, and the husband claimed that the priest in question gave mass to his family, which upset him. The husband said that he also shared photos and stories about the adultery with other priests, and reluctantly agreed to discuss it with a superior in church.

As Mr. Shapiro can inform his clients, a party that is required by an order of protection to act a certain way, or restrain his actions can be seen as guilty of contempt if he or she asks other people to violate the order on their behalf, even if they do not directly violate the order themselves. As the court explained however, it was not improper for the husband to hire a private investigator for a legitimate and proper purpose. As mentioned above, the husband did have the right to gather evidence that might support his case in the divorce up to the date of the trial for the divorce. The husband was not required by law to simply accept the claims or word of the wife that her affair was over, and the truth was that the wife had lied about this situation. The court therefore went on to rule that in the circumstances given, hiring a PI was not an unlawful intrusion into the rights of the wife under the order of protection.

As an experienced family law lawyer in the area of Long Island and New York, Mr. Darren Shapiro has worked within numerous cases which include various complications. He can therefore answer important questions that his clients ask him about the ability to commit certain acts and take particular steps in gathering evidence. In the case above, it's worth noting that if the husband had followed his wife using a private investigator simply for the purpose of gathering material to help her lose her job, this would be classed as second degree harassment. However, crucially, because the priest was still administering mass to the family, the husband had a justifiable and legitimate reason to talk to church officials about his wife's adultery, and in this particular case the church officials had requested to see the DVD. Mr. Shapiro can often offer advice on justifiable reasons for acting in certain ways under the regulations of the law. In the case above, the court granted a summary judgement for the husband which found that he had not accessed the services of the PI for the wrong reasons.

If you are planning a divorce procedure in the state of New York, Mr. Shapiro, a family law attorney, can help you take the right steps in pursuing your best interests. Contact Mr. Darren M. Shapiro's law and mediation office via our online form, or over phone at (516) 333-6555. Mr. Shapiro, our principal, is a compassionate and experienced family law mediator and attorney.