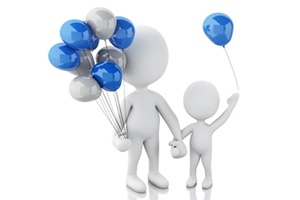 Family is, by far, one of the best things a person can have in life - but that doesn't mean that it isn't rife with complications from time to time - particularly when things like marriage, divorce, and child custody are involved. Though it might not be something that we like to think about - divorce is actually very common in the United States, with approximately half of all marriages ending in permanent separation. Researchers suggest that around 40-50% of all first marriages will end in divorce, while 60-65% of second marriages end in divorce or separation. While this issue has always been a factor in American society - it's something that has become increasingly common over the recent decades, as changes in the law make divorce much easier for unhappy couples. Now, though divorce rates have decreased since their highest point in the 1970s and 80s, they still represent the commonplace nature of divorce across the US. For example, the divorce rate in Suffolk County, be it Hauppauge, New York or other areas, is at 8% - meaning that nearly 10% of all the people in Suffolk County will need to approach a professional family lawyer for assistance at some point in their lives.

Hauppauge is part of Suffolk County, Long Island - a census designated place that is located in the towns of Smithtown and Islip in Suffolk County, New York. According to Wikipedia, the census conducted during the year 2010 found that the population at that time was approximately 20,882. Of that number, around 7,006 households were divided into percentages - 34.2% made up of families with children under the age of eighteen living with them, 68.6% made up of married pairs that lived together, and 20.1% made up of non-families. Since that time, more recent data gathered by city-data.com has found that approximately 56.4% of the adults living in Hauppauge are married, while 8.8% are divorced, 6.3% are widowed, and 1.5% are separated.

These statistics don't designate Hauppauge as any more, or less prone to divorce than any other area throughout Suffolk County, New York, or America. The truth is that your geographical location is unlikely to have much of an impact on whether or not you can expect to enjoy a successful marriage. However, looking at the statistics can give some couples peace of mind when it comes to recognizing they are not alone in their circumstances. In fact, a lot of people find themselves seeking out the guidance and expertise of a family law expert at one point or another - regardless of whether they're looking into the possibility of divorce, or considering a more positive change in their life - such as adoption. Those living in Hauppauge have a particularly convenient solution to turn to when in need of additional guidance in the realm of family law, as Mr. Darren M. Shapiro has opened his law office nearby, just off Jericho Turnpike in nearby Nassau County, Long Island.

No matter what kind of family law matter you're dealing with, the chances are that you have to manage a range of emotions and concerns, as well as questions that you may need answering. Mr. Shapiro offers all of the guidance you could possibly ask for from his office at Suite 300-G at 99 Jericho Turnpike Jericho, New York, 11753. Whether you're hoping to learn more about the complexities of divorce and equitable distribution, you're hoping for guidance on child custody matters and visitation time, or you simply need someone to walk you through your current legal issue, Mr. Shapiro could be the perfect solution. From his welcoming and convenient location in Nassau County, Mr. Shapiro works for his clients as a fierce litigator, experienced matrimonial law attorney, a collaborative lawyer, or a trained mediator among other things.

Whether you've dealt with a matter of family law before, or not, it's worth noting that a divorce is a highly stressful event, that often leads to life-changing circumstances. When you're in the midst of the emotional turmoil that this process can bring, or you're dealing with the major life changes that come with planning your future from a completely new perspective, it's more important than ever to make sure that you take care of yourself by accessing the right assistance and guidance. The strain and upset of this process can leave you both physically, and psychologically vulnerable, which means that you need to protect your health, your mind, and your legal standing as much as possible. No matter what the specifics of your particular case include, Mr. Shapiro has the skill and experience to discuss your case with you at great length - covering everything from where you might want to attend court, to what kind of options you can consider for legal practices - from mediation, to litigation. In some circumstances, you might also work alongside Mr. Shapiro and various other professionals so that you can pursue your best interests in the most successful way possible.

For those who live in Hauppauge, or nearby, access to Mr. Shapiro's office can offer a source of comfort and advice for those who need to be guided through each aspect of their family law procedure. To Reach his office, you can either take exit 34 from the Northern State Parkway, or drive from exit forty on the Long Island Expressway. Whether you're using collaborative law, mediation, or litigation, the fact that Mr. Shapiro has spent so much time dealing exclusively with family law, in areas from divorce, to child custody, could help to put your mind at rest that you're working with the right man. In fact, Mr. Shapiro has been working in the courts of New York and Long Island since his admittance to the New York State bar in 1999.

To learn more about Mr. Shapiro's practice, his reasonable rates, and the professional guidance that he can offer you in your specific case, please feel free to contact us at your earliest convenience. You can choose either to get in touch through our available online forms, or via our telephone number at: (516) 333-6555. Mr. Shapiro is ready and waiting to speak with you.