The Details of DNA Paternity Testing in New York 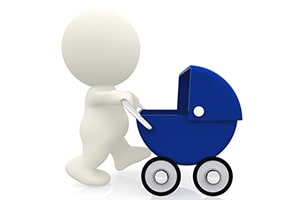 DNA testing has been officially recognized by the state of New York as a way of determining paternity for a number of years now. Ever since the medical world proved the accuracy of DNA testing, divorce and family courts around the country have relied upon this solution to resolve various issues regarding paternity. In fact, the New York Family Court Act outlines the importance of DNA testing for establishing paternity within section 532 of the statute.

For potential fathers concerned about paternity issues, or parents attempting to determine the legitimacy of a father's biological connection to his child, DNA testing can be essential. With the help of a family law professional or divorce lawyer like Mr Darren M. Shapiro, it's possible to find the proof required to argue for child custody, or request child support from a biological father. Indeed, Section 532 of the family law records requires that all magistrates or judges in the area of family law advise parties in a dispute of their right to request DNA testing to support their case in a paternity matter.

Interestingly, section 532 also suggests that the court is also responsible for ordering DNA testing when it's requested by either party involved within a family law dispute. While both parties will have the right to a paternity test, and a test is often ordered when such a request is made, there are stipulations. For instance, the family law statute suggest that DNA testing should be prohibited if it is not in the best interests of a child. As with all issues involving children the best interests of the child will always come first.

The Complexity of DNA Testing in Family Law

Mr. Shapiro and many other child custody attorneys are very familiar with the process involved with DNA testing. This procedure is very common when it comes to dealing with divorce lawyers and cases regarding children, because it helps to ascertain a biological connection between a child and their father. The courts of New York can even order a paternity test when neither party requests it.

However, while the statute seems relatively straightforward at a glance, there's always the opportunity for issues to arise. For instance, one party may file an action requesting a paternity test from the courts. In this case, the party may be seeking a paternity test with the hopes of establishing fatherhood, but the responding party may stop the process in its tracks by acknowledging the paternity of the other party. In this situation, the responding party agrees on the issue of paternity with the requesting party. When both parties agree, you may assume that no testing would be required, but there are still circumstances in which the court will order testing.

As Mr. Shapiro, and other divorce attorneys remind their family law clients, section 532 of the Family Court Act suggests that a judge will be responsible for ordering DNA testing if such a process is required by either party, unless equitable estoppel or other legal impediments apply. The term "shall" is used in the statute, and this means that the court will not be able to exercise discretion when it comes to this matter. If a party requests a paternity test, the statute demands that the court must perform the actions following the word "shall" which means that the paternity test will be ordered regardless of whether the responding party acknowledges paternity.

One other point to note is that the New York courts may order DNA testing without a motion launched from either party - so long as they feel that this process is in the best interest of the child. In one case, the court determined that a lower court had acted erroneously when they rejected the case of a petitioner asking for a DNA test after he first agreed that he was the child's father. Apparently, the father then learned that the mother had been involved in an affair at the time of the child's conception, and so the petitioner asked the court for permission to question the mother about the affair, and potentially order DNA testing as a result.

Upon appeal, the court chose to reverse the lower court’s decision and find in favor of the petitioner, after they originally rejected his request. The courts explained that it was the right of the petitioning party, according to section 532 of the Family Court Act, to request a DNA test - regardless of whether he had previously acknowledged paternity or not. The court's decision was based on the fact that the father had learned of the potential affair after accepting paternity for the child at the start of the legal case.

If you believe that DNA testing might be able to help with your own family law case, or you want to explore your options around a paternity dispute, please reach out to our principal at the Law and Mediation Office of Darren M. Shapiro. Darren Shapiro has years of experience representing his clients in paternity, custody, and support cases. Schedule your initial consultation, up to a half hour free, by calling (516) 333-6555, emailing or utilizing our contact form today.