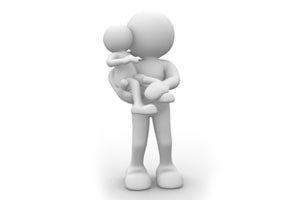 The courts of New York are obligated to follow certain rules and guidelines when they're attempting to act in the best interests of a child during a family law dispute. When an individual approaches the New York court with a family law and divorce lawyer like Mr. Darren Shapiro at their side, they must expect that the court will always put the best interests and needs of the child first when it comes to dealing with matters of custody, visitation and paternity. In order to make the right decisions about the needs of a child in such a case, sometimes the courts must look closely at the issue of parentage. One option, and in some cases obligation, that the courts have, is to order a DNA test to support New York paternity cases. The lawmakers in New York have also passed a similar statute addressing when the courts must order a Genetic test for a New York child support case.

As a child custody attorney, Mr. Shapiro has worked alongside numerous couples in child custody, visitation, paternity and support cases. In some instances, he and his clients have both found that genetic testing can be a critical part of supporting a specific argument - particularly when one of the parties in the case disputes paternity. While options for over-the-counter DNA testing has become more popular as a way of testing for an individual's ethnic heritage in recent years, it's also come under fire for it's less than ideal accuracy levels. When it comes to legal cases, official DNA tests are often recommended to determine results with almost perfect certainty. Of course, that isn't to say that tests administered by the state will always be correct in returning an answer to a paternity question. Rather, the methodologies used for these genetic tests are accurate enough that the court will often feel confident basing their decisions on the results.

Addressing the Issue of Genetic Testing

When it comes to the discussion of using genetic testing in a child support case, section 418, article 2 of the Family Court Act under the New York Consolidated Laws states that the court "shall" order the mother, the alleged father, and the child to submit DNA either when requested in a motion from one of the parties in the family law case or ordered by the court for their own reasons. Breaking down the language used in the statute, we find that the judge or support magistrate in a New York court has the ability to order DNA testing on their own, without waiting for one of the parties involved in the case to issue a request. The language also indicates that when parties do request testing, the judge will not be able to deny the case. However, testing will only be appropriate when the issue of paternity is raised.

As Mr. Shapiro often explains to his child support clients when explaining the nature of DNA testing in these cases, section 418 of the Family Court Act also provides additional guidance. It explains the situations in which a support magistrate or judge will not be able to order testing, even if the issue of paternity has been contested. For instance, the judge will not be able to order a genetic test after the judge has already made a written determination stating that a test wouldn't be in the best interests of the child involved. This may happen in cases wherein another court has already made a decision about the parentage for the child, or when a court has found that a party has been equitably estopped from contesting paternity.

As mentioned above, the issue of equitable estoppel can alter the way DNA testing is addressed in a child support or custody case. For those who aren't familiar with the term, Equitable estoppel refers to a legal principle that can prevent parties from making specific arguments based on their behavior in the past. In the instance of family law agreements, the doctrine for equitable estoppel is often concerned with protecting the best interests of a child, and what it would mean for a child if they found out that what they believed to be a parental relationship with a father was invalidated.

As a divorce attorney and child custody attorney, Mr. Shapiro will always work passionately to support the best interests of his client, and what his clients feel are in the best interests of any children involved in a case. However, as he reminds his clients in cases involving genetic testing, once DNA results have been taken by the court, they will establish a rebuttal presumption of paternity. What this means is that if the argument made by the DNA results is not rebutted, then paternity will be established, and orders of support will be given as requested and necessary. However, the party who has had the motion filed against them will be able to present evidence that acts as a rebuttal against the DNA testing results.

If you're facing an issue regarding child support and you believe that it may be important for you to understand the nature of and rules around genetic testing in the legal system, you can contact Mr. Darren Shapiro today for further advice. On the other hand, if you simply want help navigating the complicated family law system, contact the law and mediation offices of Darren M. Shapiro at your earliest convenience at (516) 333-6555. You will be able to schedule your initial free consultation for up to 30 minutes.