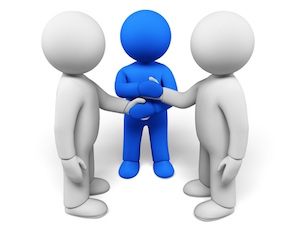 Mr. Darren M. Shapiro Esq. is a certified mediator with extensive experience in mediating cases throughout Long Island and New York. The process of divorce mediation in New York is a voluntary process for settling a matrimonial case, used by spouses who wish to approach their divorce on more amicable terms. Typically, the process will be facilitated by the use of a professional mediator, who works together with the spouses in negotiating a settlement for the best interests of the family that both parties are able to accept. Typically, the mediator attempts to conduct sessions with an atmosphere of cooperation and respect. For many couples - particularly those with children - mediation offers a better solution than litigation because it avoids the strain of a court room experience, and is also less expensive.

Divorce mediation focuses on the idea of helping you, and your soon-to-be ex-spouse determine the circumstances of your own divorce according to what is best for both of you, and of course, any children that may be involved. During mediation with Mr. Darren Shapiro, you and your spouse will receive help in working through the issues that must be resolved for the two of you to end your marriage relationship in the most cost-effective and beneficial way possible. However, it is advised that a review attorney should be consulted, if not before then before an agreement is signed, to discuss legal rights. During the process, Mr. Shapiro will be able to offer information about the options that are available to the partners, and the way that issues are sometimes handled in court cases. However, it's important to recognize that he will not serve as a legal counselor to either party. What's more, regardless of whether the parties involved seek the counsel of a review attorney, they must recognize that they will be bound by what they agree upon during a properly drafted agreement in divorce mediation.

One way in which Mr. Shapiro aims to give his clients extensive information about the process of divorce they choose to pursue, is by providing details to other cases. For instance, in the case of Valkavich vs. Valkavich - a case which utilized the process of Long Island divorce mediation, the plaintiff sued to nullify a stipulation of settlement. In this case, the defendants in the case were the ex-wife, the center for divorce mediation, and the director. In the case, the plaintiff requested reimbursement of paid child support and punitive damages - among other things. The stipulation of settlement executed by the plaintiff and his spouse of that time included a statement that the couple would be asked to complete packages of financial disclosure, however they were permitted to waive this activity if both agreed to the motion. However, the statement also warned both parties that the final agreement should be reviewed, either through showing it to their attorney, or another advisor. Regardless, the parties involved used a financial waiver, and acknowledged that this action could have an impact on their abilities to recover assets in the future.

In the stipulation of settlement produced for this case, equitable distribution was arranged, alongside child custody, child support, and visitation rights. The stipulation stated that the spouses both agreed upon the wife having physical custody, while the husband would retain visitation rights, and pay $3,300 each month in child support. Both parties also agreed that they have received appropriate advice regarding the state of case law and child support, and that the director of the mediation had not represented either party. However, the parties later chose to amend the stipulation in order to address the husband's gross earnings through the section of child support.

The couple in question for this case was divorced when the judgment was signed by the court. In his attempt to have the settlement set aside, the husband made the argument that the provisions for child support did not comply with the Child Support Standards Act. The reason for this was that the earnings he had received in the years following the agreement had been significantly lower than the amount stated during the stipulation and amendment. Because of this information, the husband requested that the child support amount be downwardly modified based on a change of financial circumstances, and claimed that his gross annual income was lower than stated - even in the year wherein he signed the agreement. The defendants for the case moved for summary judgement, leading the court to explain that separation agreements are usually binding if they regarded fair, unless they are altered due to reasons of duress, overreaching, unconscionability, or fraud. The court suggested that the plaintiff hadn't shown that the stipulation as unfair when it was made and the plaintiff didn't argue that he was unaware of his income or that the mortgage industry was in decline at that point. He also did not show that there was a change of circumstances that meant changing physical custody to him was in the best interests of the child. As a result, the husband's complaint was dismissed.

In the process of mediation, the couple involved in seeking a divorce uses the help of a mediator like Mr. Darren Shapiro to work out their issues. Sometimes, agreements can come easily, whereas other times they will require a great deal of work and time. Mediation is both flexible and confidential, giving you and your spouse an opportunity to settle conflicts between you in a way that promotes working together. This attempt to work together can be particularly important for couples that have children. However, in order for mediation to be successful, couples are suggested to follow the advice of legal professionals and think carefully about what they want to achieve during their sessions - before an agreement is made official.

If you are thinking about using mediation as the method to solve issues within your Long Island or New York Divorce, please reach out to us and schedule your free half hour consultation at your earliest convenience. Mediating couples are invited to come in together for their free half hour consultation. It would be our pleasure to speak with you regarding your needs.