Considerations Against Mediation for High-Conflict Couples 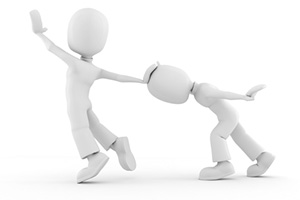 Mr. Darren M. Shapiro's law and mediation office has been a hub for negotiation and guidance to many couples in search of a solution to the complicated issues surrounding divorce, and the matters that can come linked to it - such as child custody, parenting time, equitable distribution, and more. Over the course of many years dealing with family law matters, Mr. Shapiro has discovered that attempting to resolve divorce-based issues in mediation is generally less emotionally exhausting, and expensive than attempting to ask the New York court to settle disagreements through litigation. However, he also notes that certain conditions must be in place for mediation to be successful in managing issues such as child support, spousal support, property division, and child custody. The primary condition that must be in place for a mediation session to end successfully, is the ability to communicate whether through facilitation of the mediator or otherwise.

In some situations, a mediator is the very thing required to facilitate the communication essential in resolving issues between partners who must plan their future after separation and divorce. However, Mr. Shapiro has found that in some relationships, the very reason for divorce could stem from a break in communication. When that couple engages in instances of threats, deceit, coercive behavior, or even physical violence, the relationship that remains may be too damaged for a rational discussion to be held about future options - particularly in regards to matters of child custody, maintenance, property divisions and the rest of the issues that need to be resolved in separations and divorces. Of course, just because negative aspects exist in a relationship, doesn't always mean that mediation is impossible, and there are some cases wherein mediation is still possible - even in high-conflict divorce. However, if one spouse is afraid of the other, then he or she might end up agreeing to things in mediation in an attempt to simply get away from another spouse - meaning that the process is not successful for both parties.

For couples that experience a high amount of conflict, or even abuse within a relationship, the concept of mediation through communication may seem impossible. When communication cannot be achieved in a productive way, it often occurs as a result of destructive and strong emotions, such as fear and anger. In these specific cases, mediation is not always a good solution, because peaceful negotiations become impossible. Though Mr. Shapiro has seen a high success rate when resolving issues for couples who agree to mediate, he notes that outside cases have seen greater problems. For instance, in case titled E.M vs. M.M. the court was asked to consider a case involving a high-conflict divorce, wherein the couple had two children. The wife/plaintiff sued based on the irretrievable breakdown of the marriage, which the husband admitted. However, the plaintiff also asked to vacate provisions of written marital agreements based on duress, fraud, and coercion, as well as breaches of unconscionability and fiduciary duty.

When the couple above retained a mediator to help them resolve their divorce-based issues, they agreed that neither would call the mediator as a witness, or require the use of the mediator's records. The defendant pointed to the agreement with the mediator to oppose the claims of the plaintiff in divorce proceedings, at which point the wife responded that she signed the agreement under duress. She additionally claimed that the defendant had bullied her into various choices, and that she had been the victim of deceit and domestic violence during her time suffering from cancer. This plaintiff's allegations were made over two years following her signature on the agreements, and the court found that the allegations didn't sufficiently prove she was a victim of fraud or breach of fiduciary relationship. The court suggested that two months after the first agreement, renegotiations between the parties were held, and the plaintiff did better during that mediation. The court also reasoned that separation agreements are meant to be enforced according to their terms, unless the parties can prove duress, fraud, overreaching, or unconscionability. However, an agreement cannot be seen as unconscionable just because some provisions were particularly one-sided.

In this particular case, the court reasoned that extra attention should be paid to the child support and maintenance terms. Maintenance terms should be enforced if they are deemed as reasonable and fair at the time when the agreement is made, and they should be scrutinized further than any ordinary contract. The court found that the mutual waiver of maintenance that the plaintiff had agreed to was questionable, and ordered a hearing to be held to find the facts leading to that mutual waiver. Obviously, as Mr. Shapiro points out, this case underlines the fact that courts are reluctant to ignore the agreements that have been made with the assistance of a mediator. This is why it's so important to consider the recommendations made to utilize review attorneys during mediation - particularly if you believe your ex-spouse to be abusive or coercive. It is also worth looking for a mediator who has experience in dealing with issues regarding family violence.

Importantly, Mr. Shapiro often recommends that those who wish to attempt mediation as a way of settling divorce disagreements, the mediator chosen should be apprised of any domestic violence that may have taken place, or threatening behavior that has occurred during the marriage. It's also advisable for spouses who have been the victim of abuse, as well as all mediating couples, to use review attorneys. This is always recommended, though admittedly, not everyone utilizes this suggestion, probably because they want to save from spending the fees for a review attorney. The mediator in question should assess whether the couple they manage during mediation is taking this particularly course of action willingly, or because of other reasons. For those who want to avoid a litigation, there is always an alternative solution for dispute resolution known as collaborative law - an option that hangs somewhere in the middle of litigation and mediation.

If you would like to educate yourself further regarding the issues of collaborative law, mediation, or the complexities that are generally involved in divorce procedures within the State of New York, please schedule your initial free appointment, up to a half hour without charge, with Mr. Darren M. Shapiro at his law and mediation office. You can get in touch via phone at (516) 333-6555, or by filling in our online form.