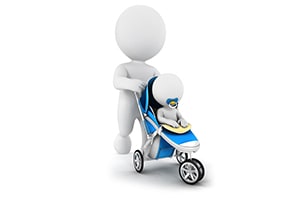 The idea of "family" has become a varied and diverse concept for many people around the world. The traditional aspect of what a family could be has evolved over the years, to include countless new dynamics. However, when it come to legal decisions around child custody, visitation, and parenting rights, it's important to remember that your local family court will have the ability to determine who should be classified as a parent, and who should not, within the bounds of the current case law. As a child custody lawyer, Mr. Daren M. Shapiro has worked alongside numerous clients within the area of family law, helping them to explore how a child can be raised according to their best interests, and the New York perception of parentage. Up until recently, the courts, and Domestic Relations Law § 70 have outlined that only a "parent" can petition for custody or visitation rights.

Perhaps one of the most complex elements of family law, and one of the things that makes this area more challenging to a divorce attorney like Mr. Shapiro, is the fact that Domestic Relations Law § 70 does not outline how a "parent" should be defined. Ultimately, the courts must determine that for themselves. The law, until recently, has been that for unmarried couples, partners that have no adoptive or biological connection with a child will not have standing to seek custody and parenting time. However, abandonment of the child, parenting rights surrender, and other extraordinary circumstances can change the circumstances that the court must consider.

How the Understanding of Child Custody Law has Changed

According to the court of Appeals in New York, the definition of parentage was outlined in the case of Alison D. vs Virginia M in 1991. However, while this definition might have been applicable with child custody lawyers and local courts originally, it's gradually become less reasonable in the modern world, where family dynamics are growing more complex. As the definition of what can be seen as a "family" has changed into something more versatile, the courts of New York have been forced to reconsider the way that they examine parentage from a legal perspective.

A new precedent isn't something that's established lightly, as Mr. Shapiro reminds his clients. However, it is something that parents and families should be aware of as the family dynamic grows more unique and diverse for many. A new precedent in the matter of Brooke S.B. v Elizabeth A.C.C. for instance in 2016, which suggests that if a party can offer convincing and clear evidence that a pre-conception agreement was established with a parent to raise a specific child, then they should have standing to argue for parenting time and custody rights. In these cases, the burden of proof is much higher than standard preponderance of evidence requirements, which can make it harder to achieve child custody for non-biological parents. However, if a child custody attorney like Mr. Shapiro can show that an agreement was established for an individual to have a child with another parent and raise that child together, then a non-biological and non-adoptive person may have rights with the New York courts.

Supporting the Best Interests of the Child

Crucially, as Mr. Darren Shapiro must remind his clients when working as a child custody attorney, no matter how complex or diverse the matters of visitation and child custody may seem in any specific situation, the judges involved will always be required to address the case with the best interests of the child in mind. The courts will need to think carefully about what outcome will be most effective for the child's mental and physical health in the future. The transformative nature of the modern family dynamic, and the circumstances dictated above leaves a question open as to whether biological or non-adoptive parents should continue to have a standing with the help of a child custody attorney like Mr. Darren Shapiro, even if pre-conception agreements were not available.

Today, there is a solid legal precedent in place that determines that if a partner is able to show through convincing and clear evidence that two people agreed to raise a child together, before the child was conceived, then those people should have the rights of a parent, and therefore be able to seek custody responsibilities and visitation rights according to the New York law of Domestic Relations. These circumstances should hold true regardless of whether the parents involved have a biological relationship or adoptive link to the child in question.

For more information about the way that pre-conception agreements work in family law, or to learn more about child custody and parenting time, please feel free to read through Mr. Shapiro's other blogs, or contact him when you're available to discuss your case. Mr. Shapiro can either be reached through his online form, or via phone call to (516) 333-6555. Those who would prefer to meet to discuss their case can arrange a free thirty-minute consultation at their leisure.