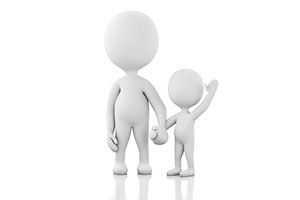 If you're considering approaching a Suffolk or Nassau County family lawyer like Mr. Darren M. Shapiro to help you express your concerns in court over the treatment of a child, to try to get an order of protection, then you may be wondering about the process involved in launching a family offense petition. In simple terms, a family offense petition, otherwise known as an order of protection case - is a type of legal case that can be filed in New York on the behalf of a child when a parent has some evidence that a family offense has been committed against the child at the hands of another family member. To act according to that child's best interests, the courts have stringent rules in place dictating who should be allowed to act on the behalf of a child in court. Although courts have held that New York Family Court Act Article 8 recognizes that a parent should be able to act on the behalf of his or her child in court by filing a petition on their behalf in appropriate instances, other individuals that share the same family home, or grandparents do not necessarily have the same rights.

Mr. Darren M. Shapiro deals with several different cases regarding children and parents as a Long Island family lawyer. However, his familiarity with these cases doesn't make them any less complex. As he often reminds his clients, it's important to remember that to act in the best interests of the child, the court will need to ensure that changes are not made to pre-existing orders for custody without evidence of a substantial change in circumstances. In other words, unless the individual filing the request to modify a custody and parenting time order, is able to show that there is a reason for the order to be changed, the petition will often be disregarded. At the same time, the courts of New York will not consider petitions that are delivered by people who they do not consider to be an appropriate person to act on the behalf of a child.

While parents obviously should have the power to take issues to court in order to protect their children and their best interests, Mr. Shapiro and many other family lawyers believe that a grandparent that has not been defined as a custodial parent should not necessarily have the right to file a family offense petition on behalf of a child. Grandparents, and other family members or concerned parties cannot necessarily be given the same rights as parents when it comes to the law and court proceedings.

One example of a case in which a family offense petition was not appropriate is the case of Rader v Rader. During this case, the petitioner involved suggested that the respondent of the case had assaulted her child. The alleged assault prompted the petitioner to seek an order of protection on the behalf of that child. The petitioner in this case was the stepfather for that child. The court dismissed the case because the step father was not considered to be an appropriate party to file a family offense motion. Although the step father argued that New York Family Court Act 812(1) should give him the right to act on the behalf of a child as a "member of the same family or household", the petition was rejected.

Mr. Shapiro frequently deals with complex cases in the area of family law. Often, he recommends that it should be the parent of the child, and not some alternative family member that brings a petition to court on the behalf of that child. Arguments, might be able to be made to the contrary however. To learn more about family law and child custody or order of protection issues, please contact our principal Mr. Darren M. Shapiro, either over the phone at: (516) 333-6555 or through our online form to schedule your initial, free half-hour consultation.